Q. What makes you write music?

I have a standard reply to this – ‘I’ve never learned how not to’.  I think there may be two kinds of composer: those who learn to compose and those who are driven to. I’m in the latter category. It’s as natural as breathing; I’ve written music ever since I can remember – even before I could read it.

Q. You break a lot of the compositional rules, doubling the third note of a chord, including parallel octaves and so forth. Why?

You’re not supposed to ever split the infinitive either.

It probably comes from my background in folk and popular music. I don’t worry too much about the academic rules. And like Schubert and Berlioz I often compose on the guitar where doubled thirds come naturally.

According to the academic rules, a chord with the third note in it twice (say, the chord of C with two ‘E’s) sounds unbalanced – the ‘E’ sounds too prominent. But on the guitar this is absolutely standard: 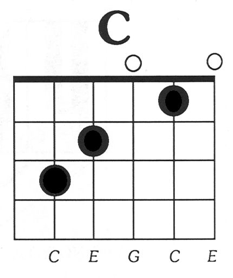 (Does this REALLY sound so wrong?)

So I tend to write lovely chord progressions full of doubled thirds without thinking too much about it. Then I go back and check what I have done: if I like the result, I keep it – whatever the rules say.

Q. Not everyone likes your work. How do you reply to your critics?

I know some people don’t rate my work – of course they don’t. I long ago gave up worrying about that. Now I just get on with doing the best work I can. If people don’t like it – well, so be it. Particularly I don’t try to be original. For me, the pursuit of originality for its own sake took twentieth century music up a blind alley.

I believe if I write as unselfconsciously as possible then my spirit can’t help but come through. I have my own kind of originality. Nobody else will write quite like me. People may like it or not, but it’s what I do.

Q. You don't put a lot of markings in your music. Do you have any advice for performers?

I don’t want to be over-prescriptive; it seems to me to be insulting the players’ intelligence. I hate those scores where every note has got three markings on it – where is the space for the performer?

For me, the process of composing and playing music is collaborative – it has to be. It doesn’t matter how much you mark: if three people play your music you’ll get three utterly different interpretations. I try to allow for that in the process.

So I’d just say two things. First, rests and pauses should generally be held for longer than the metronomic time, rather than shortened. That’s to screw up the tension.

And second, if the players want to add any twiddles or flourishes, I hope they will (see ‘playing music is collaborative’ above). When I’m playing string quartets, if the fancy takes me to sling in a portamento or a trill, I always do. On the other hand, rhythms are non-negotiable.